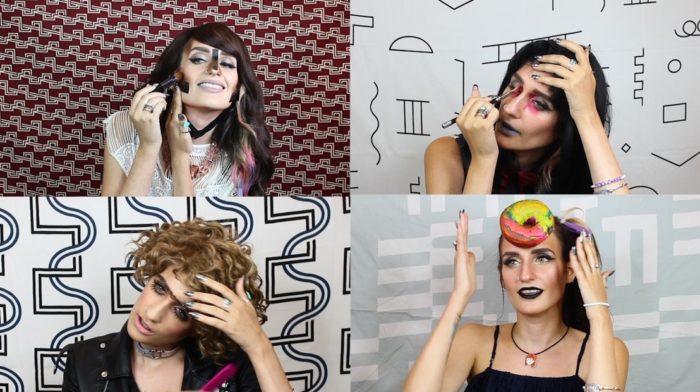 Sad13 (aka Sadie Dupuis) shared the second single off her forthcoming debut, Slugger, today! Check out the music video for “<2” and exclusive interview via Rookie Mag. The video is an homage to YouTube and Instagram make-up application tutorials.

Sadie Dupuis on identity: “Well, I think a lot of the idea of the song is about not compromising between seemingly conflicting identities that might be housed in a person. Often when people view your identities as conflicting, it’s because of incorrect assumptions about how a person’s physical identity should impact their personality. Obviously there’s a correlation between the themes of the song and the idea of creating the video, but also I just love wearing wigs. Catherine and I found a great beauty supply shop that’s underneath a train station in Philly. I should preface this by saying I’m a wig fan—I buy a lot of wigs from Japan and on Etsy, but they’re expensive. We found this cool, inexpensive place. I hadn’t spent an enormous amount of time watching YouTube makeup tutorials before, despite having a very amateur interest in cosmetics. I got really deep into the hole of watching YouTube makeup tutorials. They’re really funny, and some of them are really strange, especially the different contouring types. Some of the things in the video are just visual puns—like bagel head is [a body modification trend] where silicon is injected into someone’s forehead so that it’s shaped like a circle. Hangover makeup is another makeup trend where you have too much blush [under your eyes], but we took it literally. I asked the makeup artist Paige Campbell, who’s awesome, to make me look like absolute shit. I wanted it to look like I was up all night weeping with a bottle of wine. Some of them we did literally based on the names, but some we just actually did the makeup, like the rainbow freckles.”

Slugger pre-orders are available now on the Carpark shop and iTunes.