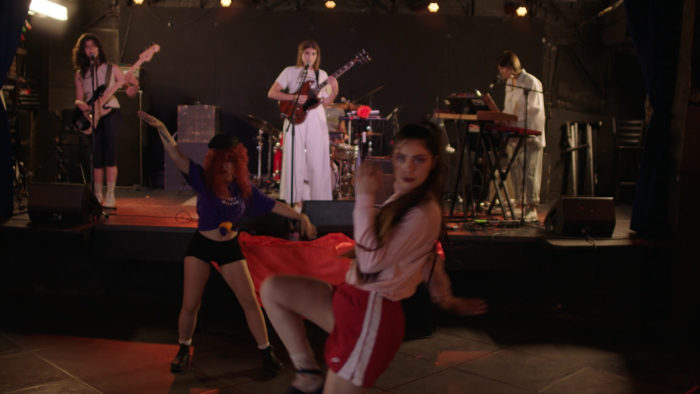 TEEN is back with a new music video for their track “Tokyo.” It was filmed at Mercury Lounge in NYC and directed by Jennifer Vanilla (Becca Kauffman of Ava Luna).

“The video for ‘Tokyo’ was filmed before and during a packed TEEN concert in New York City in the summer of 2016.

The barebones pre-show sequence is a conceptual and aesthetic reference to a choreographic collaboration between Michael Clark Dance Troupe and The Fall for their song, ‘Lay of the Land,’ in 1983. This version follows a cartoonish duo, ‘Jennifer in Tokyo’ and her zesty partner, who function as a sort of spritely id, pursuing pleasure amidst conflict like impish angel/devils on the shoulders of the song’s protagonist. Simultaneously, a less mythical and more concrete storyline takes place alongside it: the transformation the band undergoes from soundcheck in an empty room, to backstage, to showtime. The dancers usher us through this process, ultimately becoming spectators to the environment they have helped energize. As they recede into the crowd, the band steps into the spotlight, and the real show begins.” — Jennifer Vanilla

The band also has a few upcoming shows, including a Brooklyn date:
May 5th – Hudson, NY – Half Moon
May 6th – Winoski, VT – Waking Windows Festival
May 12th – Brooklyn, NY – Sunnyvale