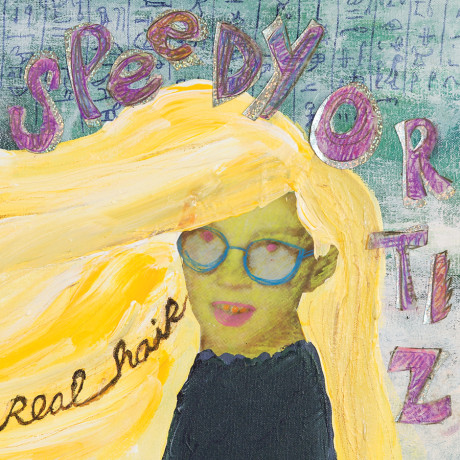 On Speedy Ortiz’s Real Hair, the band sets a course between the knotty discord of debut album Major Arcana and the pop bonafides of the preceding Sports EP. Recorded and mixed by Paul Q. Kolderie (Pixies Radiohead), the new EP finds them subtly adding new techniques to their songbook. Guitarists Sadie Dupuis and Matt Robidoux bring on additional guitar effects to color the roundabout feel of “Oxygal,” while bassist Darl Ferm and drummer Mike Falcone hit hard to deliver the jump-in-the-pit urgency of “American Horror.”

From the vocal melodies to the no-nonsense guitar turns, this is Speedy’s catchiest outing yet, drawing inspiration from contemporary Top 40 and R&B radio in addition to their regular arsenal of guitar rock. Dupuis’ lyrics continue to address concerns about identity, representation, and their misalignment, this time from a new angle: “While the last album was kind of a breakup jam, these songs are a lot more introspective—myself dealing with and talking to and making sense of myself,” she says.

With Real Hair, Speedy Ortiz once again taps into the four-part chemistry that brought their prior outings praise. They’re still equal parts noisy and poetic, and now merge those channels more seamlessly than ever.