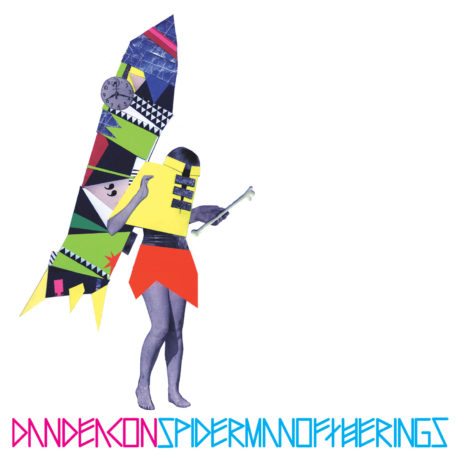 2017 marks the 10th anniversary of the record that changed everything for Dan Deacon. Spiderman of the Rings found the Baltimore-based musician transitioning from a dumpster-diving experimental artist playing house shows on the noise circuit to a major voice in electronic music. Across its 9 exuberant, still-fresh tracks, it merges Dan’s academic background in modern composition with a newly embraced pop sensibility and the ecstatic energy of his live shows. Carpark Records is proud to re-release this landmark record, coupled with the first-ever soundtrack release of the video-art collaboration that further refined Dan’s signature sound, Ultimate Reality.

Dan moved to Baltimore in 2004, with a small discography of dissonant releases under his belt. Living in a warehouse and attempting to eat on $5 a day, he toured hard, playing shows that might pay enough for him to pack his gear and green skull onto a Greyhound bus to the next town. He had no computer, no phone, and no bank account. But in the midst of those dark George W. Bush years, feeling that the world had turned into a Philip K. Dick novel—and fearing that it was destined to end in 2012 anyway—Dan figured the life he’d built in the underground was as sustainable as any.

At the same time, something shifted in Baltimore. In other cities, Dan had to work to get an audience moving by the end of his set; in Baltimore, the crowds broke into aggressive dancing from track one. This changed his writing process. Influenced by bands like Lightning Bolt and Boredoms, Dan sought to make sounds that were frenetic and extreme but also joyful. He used the tools available to him—namely, computers borrowed from his roommates while they were at work. He began writing songs for drums, songs with vocals on all tracks, songs that pushed the melodic aspects of his music to the forefront. This new music came from a place of “positive nihilism”: everything may be fucked, but that doesn’t mean we can’t have some fun. For the very first time, he wanted to make a record that faithfully reflected his frenzied live show—a show that increasingly, flying in the face of bummer scenes hampered by crossed arms and implicit dress codes, delivered a one-man Devo or Talking Heads.

Spiderman of the Rings did all that and more. Touring in the weeks leading up to the album’s release, Dan noticed his crowds grow from 20 to 200 people. The album, he slowly gathered, had leaked, and there was major buzz (which Dan largely ascribes to its emphatically WTF reception on a high-traffic Radiohead discussion board). When it finally dropped, listeners’ ears were ready.

Spiderman of the Rings is Dan’s first fully formed statement, and the record that put him on the path he’s on today. From the euphoric squeals of single “The Crystal Cat” (#84 on Rolling Stone‘s 100 Best Songs of 2007) to the gorgeous, soaring “Pink Batman,” the gentle chimes and abrasive bleeps of “Big Milk,” and the swirling, moment-defining anthem “Wham City” (#30 on Pitchfork’s Top 100 Tracks of 2007), sophisticated compositional concepts blissfully collide with dada word-craft and a child-like sense of play. With Spiderman, Dan bridged the gap between party performer and confident composer, in the process landing on both Pitchfork’s Best New Music and their top 50 records of 2007.

As a perfect complement to this pivotal record, Carpark offers, for the first time, an audio release of the soundtrack to Dan’s collaboration with video artist Jimmy Joe Roche, 2007’s Ultimate Reality. Featuring Jeremy Hyman (ex-Ponytail, Boredoms) on drums, these three singular tracks find Dan back in Baltimore, fleshing out his new sound and enjoying the enhanced set of tools Spiderman’s success afforded him. Together, they comprise the origin story of the Dan Deacon we know and love today.