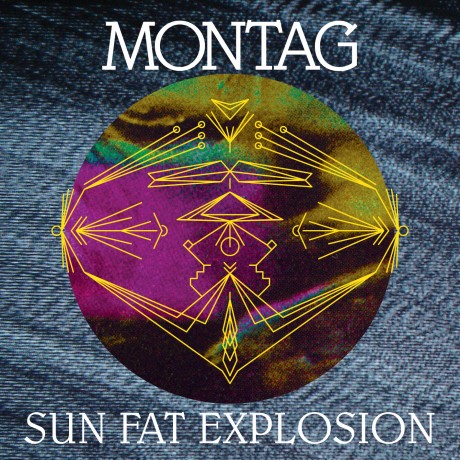 “Sun Fat Explosion” is Phase 9 of Montag’s 12 month digital singles series Phases and the sharpest turn in musical direction for Antoine Bédard yet. Working under the banner of “krautrock” Montag assembled friends for a “one-night-band”. The band was comprised of frequent Phases collaborators Dominic Vanchesteing on guitar (“New Design” and “P.I.E.C.E.S”), Guillaume Éthier on drums (“P.I.E.C.E.S.”), Philippe Roberge on guitar (“P.I.E.C.E.S.” ) and Philippe’s bandmate Mathieu Dumontier on bass. Montag handled the synthesizer duties. The original plan was to build the track upon a beatbox loop but the improvised “practice jam” ended up being far more interesting and serves as the source for “Sun Fat Explosion and its continuation, the b-side “Sun Fat Explosion 2”. After the recording session Montag added sparse vocals. The title derives from a café in Vancouver with the “completely surrealistic” name of “Sun Fat Café”. This is the first single from the Phases series to be entirely improvised and Montag shares that the session yielded a “level of intensity I could never achieve on my own.”