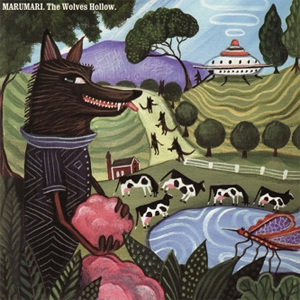 From a note found outside the recently-abandoned Marumari compound:

“The snowfall had finally let up and the once white field was green again, steam rising above the month’s harvest. Prince Geode examined the brains to make sure they would be adequate for the supercomputer’s needs. In the distance, cows grazed lazily, oblivious to the plutonian mastership hovering above them on Skunnymunk Mountain. With the winter solstice came the need for a double supply of cow brains to keep the Wolfernian species going. The year was 1951 and in the cellar of an upstate New York home, little Josh Presseisen had made the first earthling contact with outerspace on his new Remco Gonset g66b ham radio…

Josh Presseisen was the keeper of the Wolfernian secret and would always be even until that fateful day, a day that would never go down in history, April 18, 1976. When the war of the worlds, Earth wolf against alien wolf, resulted in the demise of this superior wolf race from outerspace. It was on that day that their music was passed to Josh. Through careful decoding and mastering of the Wolfernian aria, it is Marumari’s pleasure to bring to you their Wolfernian symphony.”

With this, Marumari’s 3rd full length (2nd for Carpark), we find our young space traveler in a state of transition. The first half of the record emerges from the interests on Marumari’s Ballad of the Round Ball, where strange decontextualized tones integrated freshly with space-age melodies and glitchy robust beats. The second half of The Wolves Hollow finds Marumari pursuing different ideas. Here he is less concerned with the song and more concerned with layers (I hate to use the work tracks). Listened as a whole, it is a masterful statement sure to please all those in tune with the future.

2. Searching For The Sasha Wolf

6. Birth Of The Cub Cyborg

8. Another Sphere Was Plundered.

13. I Left My Donut In The Dilithium Chamber