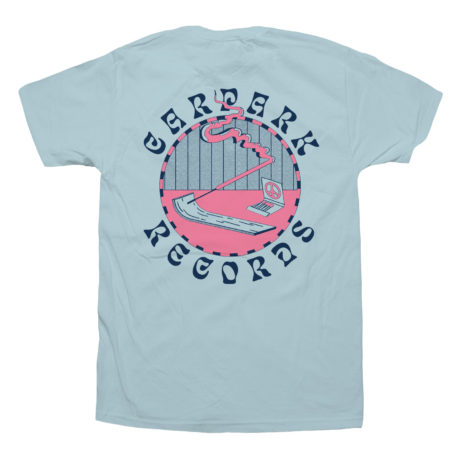 “I think my music provides space for me to say the things I can’t always say in real life.” says Virginia native songwriter and multi-media artist Corrinne James. While studying New Media and Cinematography at the University of Virginia, James created a secret Bandcamp under the alias Naomi Alligator, and began uploading her intimate home recordings online. Although her primary creative practice has been experimental animation—producing several shorts and music videos for artists like Slow Pulp and Emily Yacina—James found a way to broaden her storytelling through music. “I grew up playing piano, but I was actually learning how to play guitar on the first few Naomi Alligator songs.” James admits. “At the end of high school my friend Ruby sent me a Google Drive zip of all the Girly Sounds recordings and told me ‘You need to listen to this!’” Inspired by the sparse and confessional qualities of Liz Phair’s early portastudio recordings, James decided to create her own musical journal to share and process personal anecdotes. “I was nervous to show it to other people because I was just scared about what they might think, but eventually I started sharing it with friends in college and they would share it with more people.”

This fall, five years since her first upload and over a dozen releases later, James will share her new four-track EP, Concession Stand Girl, while making her debut on Carpark. Self-recorded at home, Concession Stand Girl features Corrinne James playing guitar, synth, and banjo. “That banjo was actually a gift from my old professor and mentor, Lydia Moyer.” James recalls. Her modern folk production and poetic songwriting links the sounds of artists like Joan Baez and Steeleye Span to a 21st century context. James wrestles with guilt, purpose, and jealousy through vivid narratives in the songs on her new EP, as well as much of her self-released music and films. James says “I kind of feel like a kid when I’m writing music—it’s just about sharing whatever you’re feeling and getting that out, you know?” Following the release of Concession Stand Girl, James hopes to expand the sound of Naomi Alligator, experimenting with new recording techniques and layered instrumentation, while maintaining her warm songwriting.

Propelled by a fondness for boundless jangle-pop, Toronto’s Ducks Ltd. (formerly Ducks Unlimited, no association with the questionable waterfowl hunting nonprofit) is a duo that operates with the dynamism of a full band: Tom McGreevy (vocals, guitar, bass, keyboards) and Evan Lewis (guitar, bass, drum programming) met at a Dilly Dally show around the time they were both applying for permanent residency and playing in different local bands, quickly recognizing something in each other: a resolute love of underrated ‘80s indiepop a la Sarah Records (specifically for Tom, U.K. groups like Close Lobsters, the Marxist band McCarthy, anything on Cherry Red Records; for the Australian Evan, The Go-Betweens and Flying Nun Records). But impressive knowledge of niche pop music does not make a band: the pair started writing and recording together in 2018, taking the time to discover their musical identity: a whole EP was recorded with outside producers and scrapped, never to be released. “It came out sounding good,” Tom explains, “But not like us.” Their critically acclaimed debut EP, Get Bleak, released on Madrid indie Bobo Integral (Tim Cohen, Massage) in 2019 and re-released on Carpark in 2021 with three additional songs, was originally recorded with live drums—“We’ve had rotating members ever since we’ve been a band. We’ve got Spinal Tap-level drummers at this point,” Evan is quick to point out. That EP, too, was redone—and with a drum machine, built from demos recorded in Evan’s bedroom, revealing the key to Ducks Ltd.’s sound: simple charms, just like the music that inspired it, and a project best served when it’s just the two of them trusting the intensity of their creative relationship. It’s worked out: Ducks Ltd. have played gigs with The Goon Sax, Weyes Blood and Juan Waters; they’ve received glowing praise in publications like Pitchfork, The A.V. Club and NME. But it’s their debut LP, Modern Fiction and its masterful melodies and depressive fun that confirms it: great things are here, and sometimes, all you need is a good friend to realize it.

The release of Blessed Repair is a grand experiment for the Baldi/Gerycz Duo. The duo consists of Dylan Baldi and Jayson Gerycz, both of whom are members of the acclaimed rock band Cloud Nothings. With Baldi on saxophone and Gerycz on drums, they deliver an album that steers away from the process of slowly crafting lyrics and instrumental components. This time, their project is grounded in the gravitational pull of both of their instruments; two people creating and releasing tension in real time. Blessed Repair is an album that romps with the spontaneous energy of free-form jazz.

Baldi and Gerycz are quite familiar with each other as musicians, proving to be an advantage as they navigate the strange yet exciting new waters of Blessed Repair. Primarily, they work as bandmates in Cloud Nothings, but nothing resembles their improvisational work as a duo. In Cloud Nothings, songs are written beforehand and rehearsed, but as the Baldi/Gerycz Duo, they just play. Which is how the project first came to fruition — they are two friends who organically wanted to see how far they can take their music together.

The project uses two iconically jazz instruments, nudging Blessed Repair into the free-jazz realm. The saxophone soars and tumbles and the drums build and scatter, but both instruments are more linked by their playful experimentation and synchronicity than anything else. While they are fans of improvisational jazz music, neither Baldi nor Gerycz had formal jazz training past high school, making this album authentically experimental for them both. That being said, Baldi does recount that his first official gig as a musician was playing jazz music in the background of a wealthy Clevelander’s dinner party in 2008.

The Baldi/Gerycz Duo have taken the opportunity to harness the liberating energy of improvisation in Blessed Repair. And ultimately, they’re two friends exploring and pushing the boundaries of their music.