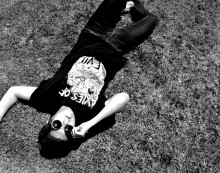 With Soon Away, GRMLN veers from the pop-punk-rooted road the band started on with last year’s Empire. It’s an aggressive album, darker and heavier than what’s come before. While it carries these characteristics, there is also a certain peace to Soon Away, thanks to songwriter Yoodoo Park’s personal growth.

The album grapples with letting go and getting used to good-byes. “Find a way to be wanted and here for someone else/ Break away from the notion, the poison in my head,” Park sings on the cathartic “Faux.” The singer-guitarist sees the constant changes of life allowing people to embrace the true nature of living. The teachings of Krishna were an inspiration to Park while writing the record and it’s a force that helped define Park’s perspective in these songs. Still, there’s an intensity to these guitar-driven tracks. “Go, but you’re breaking without me/ When days can crawl around/ To waste myself away,” Park sings on opener “Jaded,” which is built around one of GRMLN’s catchiest riffs.

After writing the songs—some in Japan, some while on tour in the U.S.—Park went back to Different Fur Studios in San Francisco with engineers Patrick Brown and Sean Paulson, who worked on Empire. On Soon Away, Park is joined by his brother, Tae San, who assisted with bass parts and some song structures; and longtime drummer Keith Frerichs.